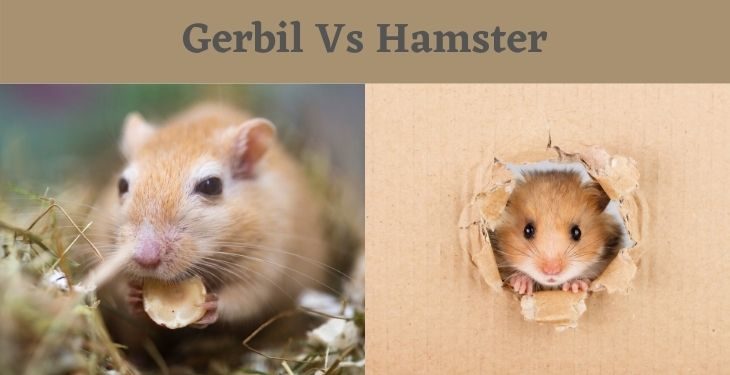 As much as the title of the article describes itself, this article will deal with the various differences that exist between a Gerbil and a Hamster. These two tiny creatures look the same but have their own specific qualities as well as characteristics. That is why Gerbil Vs Hamster is an apt title for this article. Well before starting by telling you the differences between both hamsters and gerbils I must tell you that both of them are cute and you would be lucky to have any or both of them as pets. But you need to take care of them properly as they are delicate creatures.

Basis Of Differences Between Gerbil And Hamster

Gerbil and Hamster differ on various grounds which can be discussed under the following heads:

When it comes to the size Short is the word I would use for the stout-bodied hamster: short, stubby tail; short nose or snout; and short, stocky legs.
But when it comes to Gerbils, they are typically longer than hamsters with “long” being the key differentiating point. Gerbils have long, pointed noses, similar to a rat; long hind legs on which they love to stand and have comparatively longer tails.
A great point of difference is that hamsters have internal cheek pouches where the little hamsters can stuff food to carry to their custom-made underground storage chambers. Some researchers say that their full cheeks can double the size of their heads!

The average size of the pet gerbil is 5 or 6 inches long, not including the 3- to 4-inch-long tail, and weighs 2 to 4 ounces when reached adulthood. The most common pet hamsters range from dwarf hamsters at 2 to 4 inches long (about 1.5 ounces) to the Syrian hamsters (giant hamsters) averaging 5 to 7 inches long and weighing 4 to 8 ounces.

Hamsters come in a variety of colour compositions like short or long hair ranging in colour, texture, and pattern. A hamster’s colour can range from white to cinnamon to brown to grey to black. Some hamsters’ fur may have a satin sheen, other hamsters may also have wavy hair. Some of the hamsters are decorated with a dark stripe down the middle of their backs and some have white fur around their bellies.
If you don’t like fury hamsters then no problem there are also hairless hamsters available.
Gerbils are soft and dense coats come in a wide variety of colours, it may range from 40 to 50 colours combinations.
Some of the Colour combinations include grey, tan, brown, and reddish-brown with white to grey “underpants.” Some of the gerbil species might also have dark markings on their heads.

Personality and what kind of behaviour the pet is showcasing can be a critical part of the decision-making process when adding a pet to the family. As described by the Gerbil owners, they are considered as intelligent, inquisitive, and active pets. Many owners say they are incredibly interested in people.
They like to see what you are doing and like to be in the room where most of the activity is happening, this is Because they’re not strictly nocturnal or diurnal, they’re very in tune with human activity and like to figure out the household routine.
These pets need daily interaction and handling, and they love being held. They also will entertain themselves by digging, gnawing, and shredding provided materials for nesting and would not be needing much of your help in doing that.
Gerbils jump and climb a lot, therefore their owners need to keep an eye on them when out of their tanks.
Primarily active at night, hamsters have a habit of spending a little time building a nest before curling up to sleep the day away. The night is the main time for hamster’s exploration, so experts say that early mornings and evenings are the best times to interact with them. And owners should be warned against startling or waking them prematurely, as they can be quite grumpy.

If you have heard about their nipping and biting here’s what I got when searched about them.
Hamsters generally don’t tend to bite unless threatened or frightened by anyone. They might wanna taste your hands if you have a yummy scent but make sure to wash your hands before handing it to them.
Gerbils who are raised properly and given to the pet owners at a critical age of 18 to 35 days are not likely the ones to nip or bite.

Although both gerbil and hamsters have the same dietary needs the protein content varies for both of them.
The recommended food quantity for hamsters is of 18 to 23 per cent protein, also Hamsters can even eat chicken or eggs as a treat.
For commercial food, gerbil needs to take 14 to 15 per cent protein and a mix of grain types. Also, some gerbil owners supplement their diet with crickets and mealworms.

Unfortunately, both hamsters and gerbils do not have a long lifespan. Hamsters average age is 2 years while gerbils average age is 3. But in some cases, they have also lived beyond 4 years.
Although their lifespan is less but in these years of caring for your small pets is a reward that you will never forget and those memories you will cherish for the lifetime.

How Should They Be Treated?

Both gerbils and hamsters require the same basic needs, a clean and well-ventilated cage with a solid base, plenty of bedding for burrowing, a water bottle, chew toys, and an exercise wheel. For the exercise meal and 8-inch wheel would be perfect for both of them
For caging, a minimum of 5 gallons of aquarium tank space covered with a mesh lid per gerbil is recommended and aquarium is recommended because of the gerbil’s propensity to chew, threw, and ingest everything.
Also, Because gerbils produce very little urine and their poops are tiny, hard pellets, expect to clean the tank every two weeks.
For hamsters, it is recommended at least 3 feet of unbroken floor space.
With the right-sized cage, the nest can be spot cleaned and a full cleanout would only have to happen 4 to 5 weeks at a time and also sometimes according to when it is needed.

Hamsters are loved by everyone. Hamsters as pets are very energetic and fun-loving. When your hamster is about … 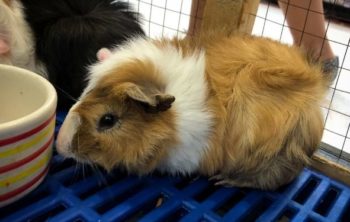 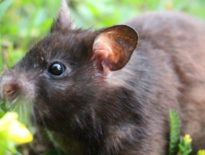 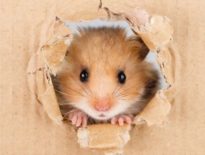